About For the Voice

Iris brings a wide range of diversity to her studio. The ability to teach and integrate diversity in musical styles is appealing to her students. Iris incorporates vocal training in Classical, contemporary, gospel, folk, Latin, jazz, and pop. Iris has extensive experience performing Spanish folkloric, sacred and secular music. 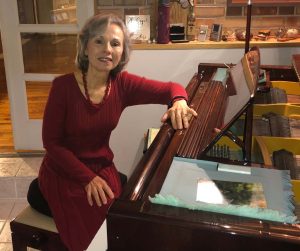 Iris helps students prepare for auditions, juries, recitals, and performances. She teaches a combination of vocal techniques to students with a variety of stylistic musical interests. Authenticity in foreign language diction is important. Iris teaches diction for singing in: English, Spanish, Italian, Latin, French and German.
In the University setting, the focus is to prepare Music Performance Majors and Minors, Music Education as well as Applied Voice Students for the required curriculum in an environment where they can explore and experience their full potential.

For private students, repertoire presented is according to individual interests ranging from Spanish literature and other foreign languages, Classical, music theatre, contemporary, folk, jazz and pop styles. Performance training is provided and applied through the means of Student Recitals and Master Classes, NATS competitions and auditions throughout the year.

I am currently offering Virtual Lessons via FaceTime or Zoom whichever is most convenient for you.

An Evening of Song: Festival of Musical Diversity
A joint recital to benefit the Multiple Sclerosis Foundation with
Melissa Eckhoff, soprano, Kenrick Mervine, piano/organ
Church of the Blessed Sacrament, Denver, CO | May 2006

Guest Soloist, Songs of the Americas Concert
Denver School of the Arts | October 2003